August has seen some exciting neuroscience research developments, including controlling neurons using a smartphone, the discovery of a new pain organ in the skin and a potential new way to treat Tourette Syndrome.

A device that can control neural circuits through a brain implant that’s controlled by a smartphone has been developed by scientists at the Korea Advanced Institute of Science and Technology and the University of Colorado Boulder.

The device is able to deliver drugs and light to specific neurons of interest, enabling wireless chemical and optical neuromodulation. Drugs can be delivered for several months without them running out by using Lego-like replaceable drug cartridges. These were assembled into a brain implant for mice, with a urathin probe as thin as a human hair, and consists of microfluicic channels and tiny LEDs, enabling unlimited drug doses and light delivery.

The device is controlled by a simple interface on a smartphone, with specific combinations of light and drug deliveries being able to be administered from outside the lab.

The team are next looking to develop this technology to make a human brain implant for clinical use.

2. Brain activity may help predict success of CBT in depression

In a study led by the University of Glasgow, researchers found that functional magnetic resonance imaging (fMRI) could be used to predict a patient’s response to cognitive behavioural therapy (CBT) before beginning treatment.

By recording brain activity using fMRI, the researchers were able to classify individuals as CBT responders or non-responders with around 80% predictive power. If this can be used to predict treatment response, it will not only reduce the number of patients receiving CBT who won't benefit from it, but will enable patients to receive the appropriate treatment faster.

Researchers at the University of Cambridge have discovered that age-related stiffening of the brain causes brain stem cell dysfunction, and have even demonstrated a way to reverse older stem cells to a younger state.

The researchers investigated oligodendrocyte progenitor cells (OPCs), which are important for the regeneration of the myelin sheath that surrounds neurons and is damaged in multiple sclerosis (MS). Older OPCs were transplanted from aged rats into the softer brains of younger rats. This caused the OPCs to rejuvenate and behave like younger cells.

Following this, the researchers developed materials with varying degress of stiffness and used these to grow rat brain stem cells to study them in a controlled environment. It was found that when the old brain cells were grown on the soft material, they began to function like young cells.

This new understanding of the stem cell ageing process and how it can be reversed could be used to treat MS by enabling brain stem cells to regain lost functions and prevent degradation of myelin. 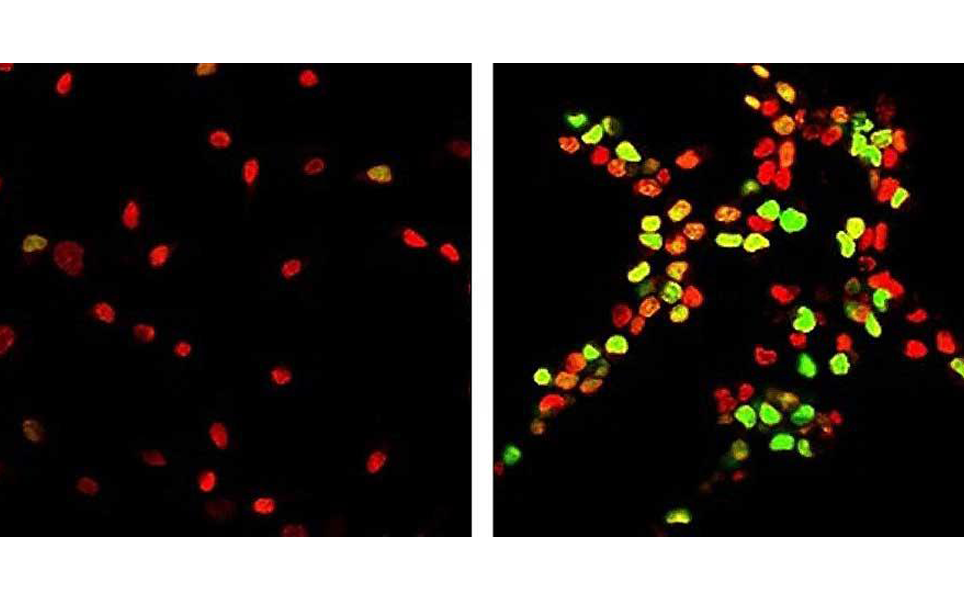 4. High-energy lasers could be used to treat Alzheimer’s disease in the future

A far-infrared (FIR) free-electron laser (FEL) has been shown to be able to break down aggregates of the amyloid protein.

The collaboration of scientists from Tokyo University of Science and Osaka University used the DFKNF peptide as the model. They found that FIR-FEL damaged the β-sheet conformation by creating small holes in the peptide film, as well as disrupting hydrogen bonds between adjacent β-sheets, giving rise to free peptides.

After exposing the peptide fibril to FIR-EFL, the researchers found that the proportion of the β-sheet conformation was hugely reduced and morphological changes had been induced into the fibril.

5. Smouldering spots in the brain may signal severe MS

Scientists at the NIH used a high-powered brain scanner to study the brains of hundreds of patients with multiple sclerosis (MS). They identified dark-rimmed spots on the scans that represent ongoing, ‘smouldering’ inflammation. These spots are known as chronic active lesions and may indicate more aggressive and disabling forms of the disease.

The researchers found that by using brain scans to see how many active chronic lesions a patient had, they were able to identify those more at risk of experiencing highly aggressive forms of multiple sclerosis. Patients who had four or more dark-rimmed lesions were 1.6 times more likely to be diagnosed with progressive MS. These patients also developed motor and cognitive disabilities at a younger age.

These results suggest that specialised brain scans could one day be used to identify those who are at risk of developing progressive MS, which could lead to earlier, more targeted treatments.

Applying low-intensity electrical stimulation to the brains of patients with brain tumours has been found by researchers at Beth Israel Deaconess Medical Center (BIDMC) to potentially slow tumour growth.

The non-invasive transcranial electrical stimulation decreased blood flow within the tumours whilst the rest of the brain remained unchanged. Although further tests are required to fully assess the treatment, including determining the optimal frequency and duration, this is a promising non-invasive, low-cost treatment for brain tumours.

Researchers at Yale successfully trained adolescents with the neurodevelopmental disorder, Tourette Syndrome, to control their ticks.

A relatively new technique was used in the study; real-time functional magnetic resonance imaging neurofeedback (rt-fMRI-NF), which is used to train brain function to produce healthier patterns. Individuals aged between 11 and 19 years were able to visualise their brain activity in the supplementary motor area, a region associated with tics in Tourette Syndrome, in real-time. They were then challenged to raise and reduce activity in this area.

Using electrodes implanted in multiple brain regions of patients with epilepsy, the researchers found that a burst of ripples occurred one or two seconds before a patient recalled and began describing a new picture that was being shown to them. When the patients were recalling images they had already seen, the hippocampal ripples again occurred one or two seconds before this.

The recordings demonstrated that the ripples in the hippocampus were synchronised with cortical activation, specifically in the visual centres, where visual information is stored.

This research enhances our understanding of the neuronal mechanisms of memory formation and recall, with these hippocampal ripples having a central role.

Role of ripples in memory

A way to distinguish four classes of cells from electrophysiology spiking information has been developed by scientists at the University of Tuebingen and MIT’s Picower Institute for Learning and Memory.

Previously, it has only been possible to determine if a neuron is excitatory or inhibitory from electrophysiology recordings. By putting a dataset of recordings from 2500 neurons through statistical and computational analysis tools, the researchers found that the waveforms could be categorised by how quickly they range between their lowest and highest voltage (trough to peak duration) and how quickly the voltage returns from the peak to normal level (repolarisation time).

By plotting these two measurements against each other, the cells could be separated into four distinct groups. This development could enable researchers to better understand how different types of neurons contribute to behaviour, perception and memory.

A new sensory receptor organ in the skin that can detect painful mechanical damage has been discovered by researchers at the Karolinska Institutet.

The sensory receptor organ is made up of glia cells that have multiple long protrusions that travel up to the skin to make a mesh-like organ within it. The glia cells are highly sensitive to mechanical stimuli, such as pricks and pressure.

This discovery has shown that sensitivity to pain does not only arise in the nerve fibres of the skin, but also in this pain-sensitive organ, which could have a significant role in chronic pain and our understanding of it.

Take a look at the previous top neuroscience stories...