Which way? How is positive and negative information delivered from the amygdala?

Which way? How is positive and negative information delivered from the amygdala?

A recent paper from MIT reveals how two populations of neurons within the basolateral amygdala (BLA) carry information about pleasant or unpleasant experiences through divergent pathways.

Learning more about these pathways and how they route or misroute information could help us better understand mental illnesses like depression, addiction, anxiety and posttraumatic stress disorder.

Corresponding author Kay Tye, the Whitehead Career Development Professor of Brain and Cognitive Sciences and member of MIT’s Picower Institute for Learning and Memory, said: “I think this project really cuts across specific categorisations of diseases and could be applicable to almost any mental illness.”

The ability to recognise a stimulus as positive or negative is crucial for survival as well as mental health. Previous studies by the Tye lab have identified intertwined neurons within the BLA, defined by their projection target, which play distinct roles in valence learning. One of these populations projects to the nucleus accumbens (NAc), which helps animals learn to seek rewarding experiences. The other group projects to the centromedial amygdala (CeA) and helps animals avoid negative stimuli.

In the new study, the researchers wanted to find out what those neurons do as an animal reacts to a cue predicting an aversive or pleasurable outcome.

To do this, the authors genetically expressed channelrhodopsin (ChR2), a light-sensitive protein, in the cells projecting from the BLA to the NAc, the CeA or the ventral hippocampus (vHPC, a connection known to be involved in anxiety) in three groups of mice. Subsequent light stimulation allowed them to identify the neurons synapsing onto the different targets which are otherwise indistinguishable within the BLA.

The investigators then trained the mice to discriminate between two sounds, one associated with a sugar water reward and the other with the bitter taste of quinine. In vivo electrophysiological recordings were then made from each group of neurons as the mice encountered the two conditioned stimuli. 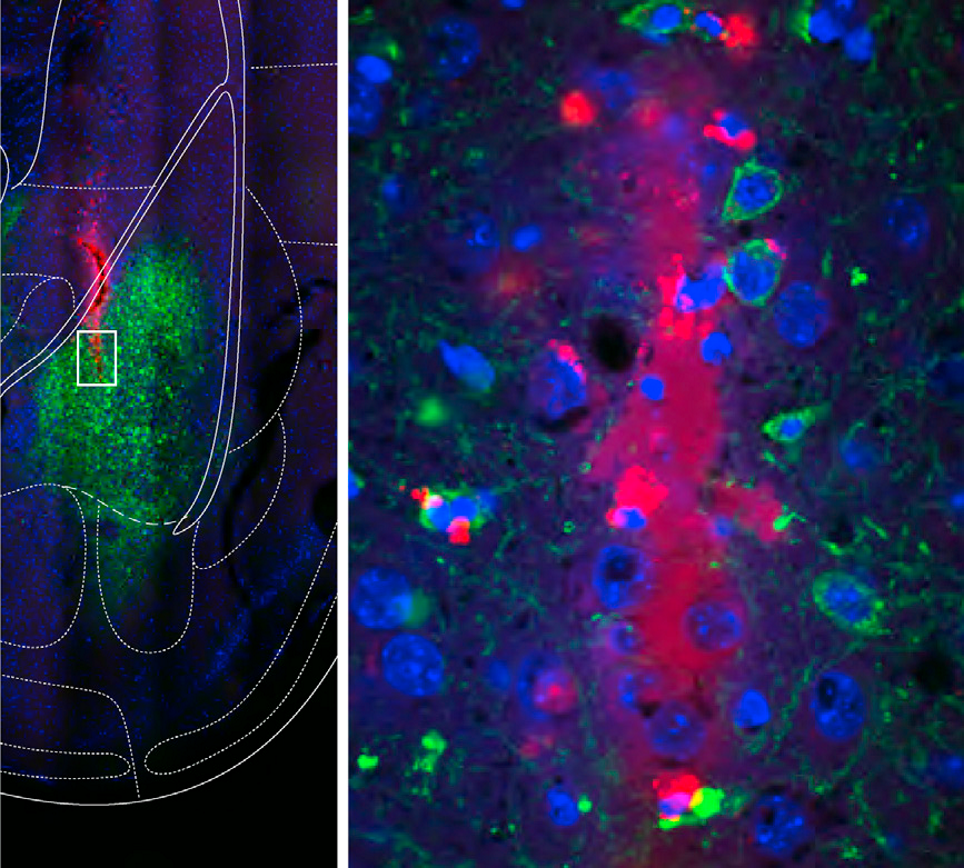 Representative image of a recording track in the BLA (Credit: Anna Beyeler/MIT)

Surprisingly, the team found that neurons within each population of cells are highly heterogeneous. Some cells responded to one cue, some responded to the other, and some responded to both. Additionally, some neurons were excited by the conditioned stimulus and others were inhibited.

These findings highlight that a full understanding of the way the brain processes positive and negative stimuli will require further work on specific subpopulations of cells associated with valence encoding.

“Five or 10 years ago, everything was all about specific brain regions. And then in the past four or five years, there’s been more focus on specific projections. And now, this study presents a window into the next era, when even specific projections are not specific enough. There’s still heterogeneity even when you subdivide at this level,” says Tye. “We’ve still got a long way to go in terms of appreciating the full complexities of the brain.”

The researchers hope their work, published in Neuron, will lead to the development of new therapies for mental illnesses.

Co-lead author of the study, Anna Beyeler, said: “The first step is to define the circuits and then try to go in animal models of these pathologies and see how these circuits are functioning differently. Then we can try to develop strategies to restore them and try to translate that to human patients.”

A question that remains is why these different populations intermingle within the amygdala. One hypothesis is that cells reactions to various inputs need to interact quickly with each other, coordinating responses to an urgent signal, such as an alert that danger is present.

In this study, ex vivo recordings were used to distinguish the BLA projection neurons expressing ChR2-eYFP from the non-expressing neighbours that receive excitatory inputs from projectors in vivo. These recordings were made using a SliceScope Pro 2000 electrophysiology rig.