Scientists at the University of Bristol have shown that associative synaptic plasticity involves a complex intracellular signalling cascade requiring the activation of separate Ca2+ sources and metabotropic glutamate receptors.

Principal investigator, Dr Jack Mellor, from Bristol’s Centre for Synaptic Plasticity, said: “Our research shows that it is not simply the local concentration of calcium ions within single dendritic spines that determines whether a synapse becomes stronger or weaker. There is a much more complex cascade of feedback loops involved in the regulation of synaptic plasticity. This is important because it enables neuromodulator systems to control the triggers for synaptic plasticity.”

On the postsynaptic membrane of glutamatergic synapses on dendritic spines, an initial depolarisation of the postsynaptic spine is initiated by activation of ionotropic glutamate receptors. This depolarisation can be further amplified by the opening of voltage-gated calcium channels. NMDARs also only open when the neuron is already depolarised, increasing Ca2+ influx.

This creates a positive feedback loop that will eventually lead to cell toxicity and death if not regulated. Regulation comes in the form of SK channels, which pump K+ ions out of the cell when intracellular Ca2+ gets too high. However, the opening of SK channels inhibits synaptic plasticity, which depends on sustained depolarisation. 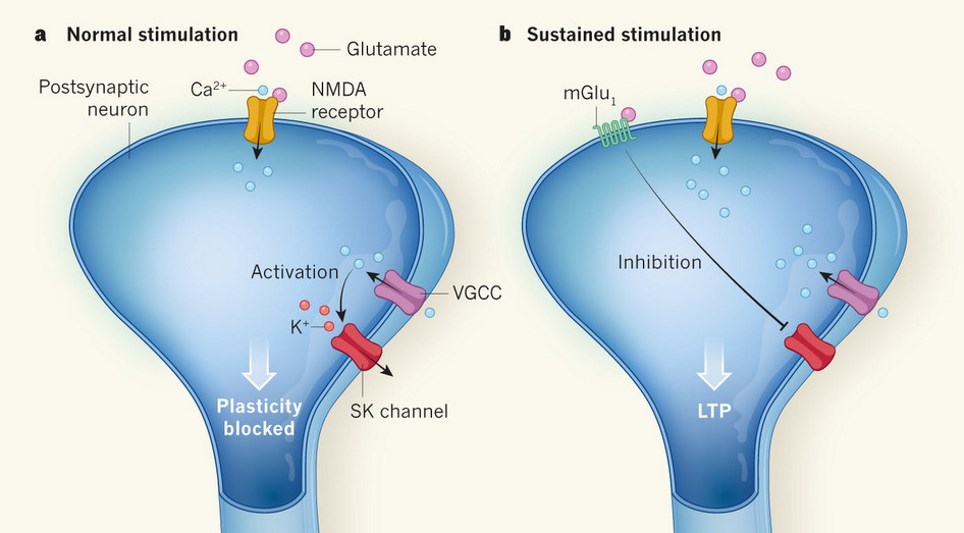 The Nature Communications paper demonstrated that repeated activation of pre- and post-synaptic neurons induced LTP, but required the activity of mGluR1. These receptors act by inhibiting SK channels, leading to a sustained depolarisation and enhanced Ca2+ influx.

An important, and still unanswered question is how these mechanisms converge to determine the strength and direction of synaptic plasticity.

Dr Mellor said: “Scientifica’s Multiphoton Imaging System provided us with an integrated whole-cell patch clamp and calcium imaging system that enabled us to measure both the calcium response within single dendritic spines and the outcome of those calcium responses in terms of synaptic plasticity."