2School of Physiology, Pharmacology and Neuroscience, University of Bristol

Neurons receive thousands of synaptic inputs which if activated synchronously in sufficient numbers cause action potentials. But synapses are not static relay points for the electrical signals travelling within neural circuits; they are also a key component of the brain’s plasticity mechanisms allowing adaptation of behaviour to changes in the environment. In this context, synapses must create signals to enable neurons to assess their impact on firing and for the adjustment of their strength. Ca2+ ions are a critical synaptic signal for plasticity arising principally from NMDA receptors, but also from voltage-dependent Ca2+ channels and intracellular stores. Therefore, to investigate and understand the mechanisms underlying synaptic plasticity and function, it is important to measure the strength of synapses electrophysiologically as well as the Ca2+ signals generated by synaptic activation.

The study of excitatory postsynaptic Ca2+ transients (EPSCaTs) is particularly attractive in the hippocampus due to their role in cellular processes that underlie associative learning such as Hebbian synaptic plasticity. Excitatory synapses in the CA1 area of the hippocampus undergo persistent changes of their response to stimuli when action potential discharges from the post-synaptic cell are closely time-correlated with synaptic input. Understanding how the ensuing spine EPSCaTs encode the magnitude and direction of synaptic plasticity can uniquely be achieved by integrating electrophysiology with two-photon fluorescence imaging of spine Ca2+ transients (e.g. Tigaret et al. (2016), Figure 1). In the CA1 area of the mature hippocampus, the apical dendritic tree of a pyramidal neuron has a typical width of 300 – 400 µm. Two-photon excitation microscopy provides the unique advantage of enabling the exploration of Ca2+ fluorescence signals in spines located on dendritic segments deep below the surface of the specimen, commonly 100-200 µm inside a 450 µm thick ex vivo hippocampal slice. Furthermore, this approach also refines the spatial dimension of the research such that synapses can be studied in the context of their location. 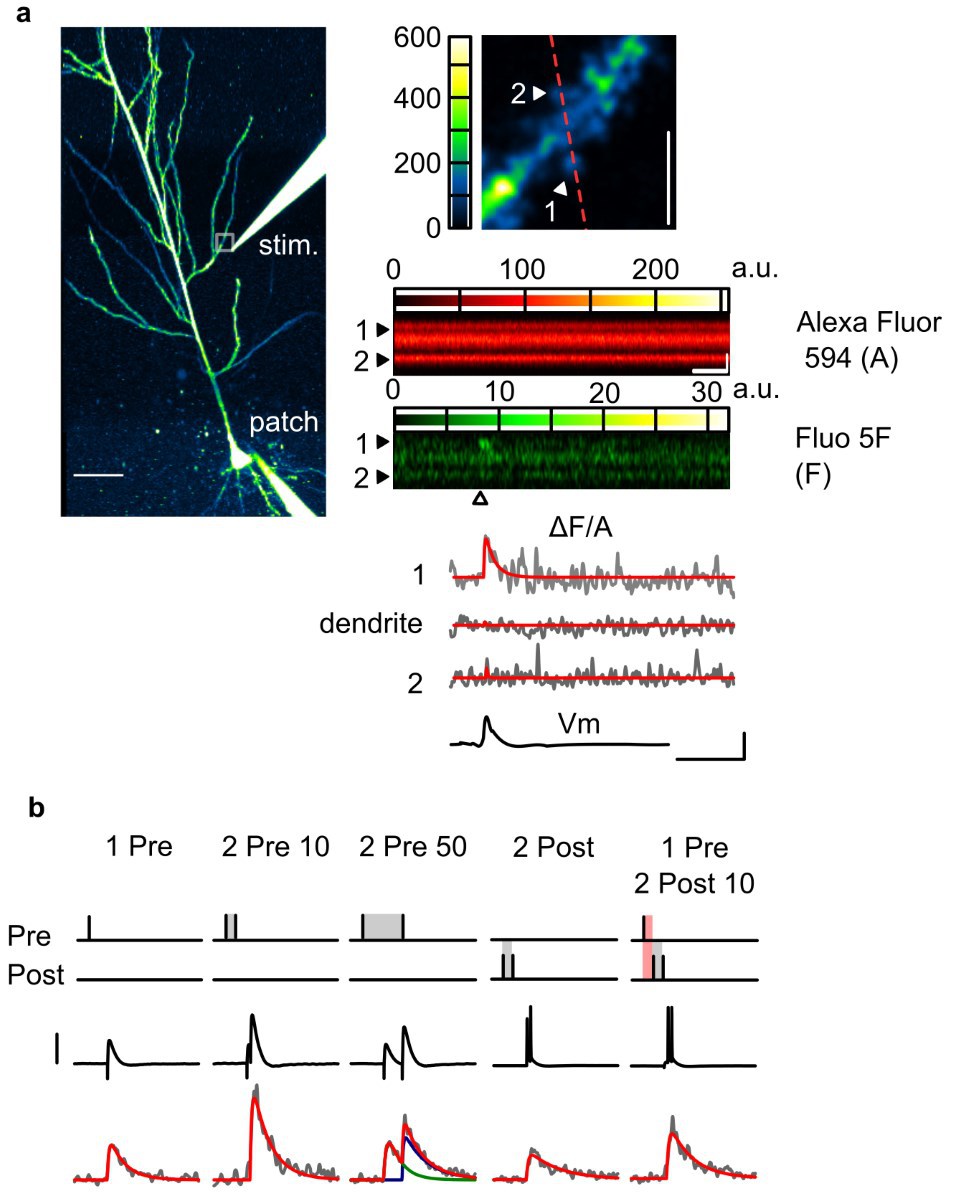 Figure 1. Two-photon imaging of Ca2+ transients in dendritic spines. (a) Left: Overview of a CA1 pyramidal neuron loaded with Fluo-5F (A) and Alexa Fluor (A) through the patch electrode, and visualised in the Alexa channel. Top right: Zoomed-in snapshot of the white square region in the overview, encompassing a dendritic segment where spine EPSCaTs were images. The line-scan trajectory for EPSCaT imaging is shown in red. Bottom right: A presynaptic stimulus delivered to Schaffer collateral terminals through an extracellular microelectrode (“stim”) evokes an EPSCaT in only one of the scanned spines. (b) EPSCaTs of various amplitude and time course can be elicited by combining presynaptic stimuli with postsynaptic action potentials evoked by current injection through the patch electrode.

We use a Scientifica Multiphoton Imaging System based on a SliceScope Pro 6000 to perform synchronised imaging and electrophysiology recordings (see Tigaret et al. (2016) for more details).

Since we are interested in synaptically generated signals, we locally stimulate Schaffer collateral axons with an extracellular glass microelectrode filled with ACSF containing Alexa Fluor dye placed in stratum radiatum close to the neuron (~ 100 µm above and laterally from the main apical dendritic shaft).

Whole-cell configuration is established under voltage-clamp, then cells are switched to current-clamp and dye-loaded by injecting 100 – 150 pA inward current for approximatively 15 min.

After dye loading, spines on secondary order branches of radial oblique dendrites are visualised by raster scanning (4 – 5 frames /s), and current-clamp recording of synaptic responses is initiated. Subthreshold excitatory postsynaptic potentials (EPSPs, ~ 5 – 10 mV recorded at the soma) are evoked, and the monopolar stimulating electrode is slowly advanced until it is positioned at ~ 30 µm from the visualised dendritic spines.

Optically responsive spines that generate EPSCaTs time-synchronized with the stimulus are detected in line scanning mode (1000 lines /s) while delivering pairs of stimuli (25 ms apart, to increase release probability since individual synapses often display release failures). Crucially, we have developed a denoising algorithm that may be implemented in real time and which enhances the signal to noise for EPSCaTs greatly facilitating their detection (Tigaret et al. (2013), see Figure 2 for example of denoised EPSCaTs). This dramatically speeds up the process of finding suitable spines and dendritic regions with synapses that are activated by the stimulating electrode. 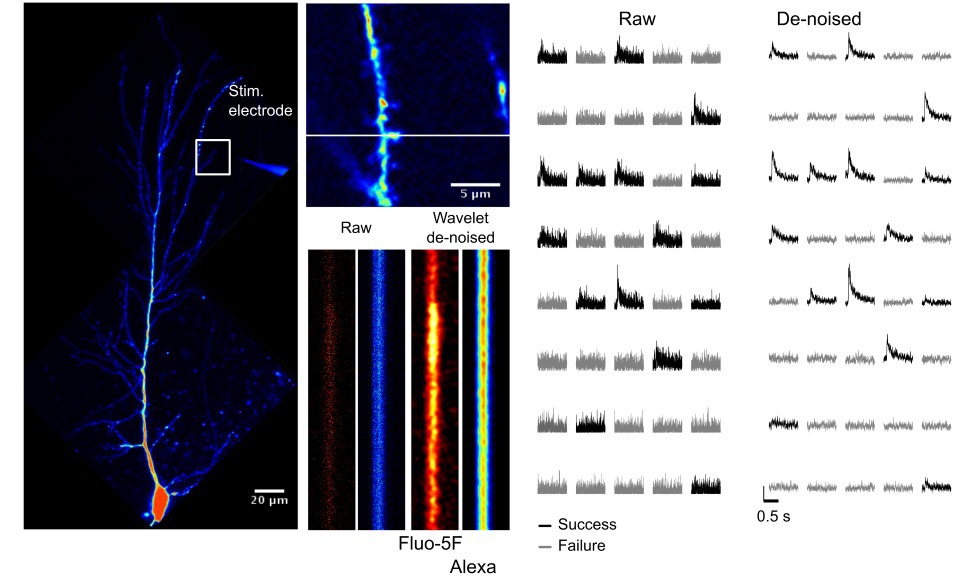 Figure 2. Wavelet de-noising improves the signal-to-noise of spine EPSCaTs and can help in the detection of failures in synaptic transmission.

Photodamage. The small release probability at the Schaffer collateral synapses may often compel one to record several times from the same set of spines in the hope of detecting EPSCaTs. This should be avoided as it increases the risk of photodamage and shortens the experiments. Usually, photodamage is seen as irregular swellings of the spine heads and the underlying dendrite and can be avoided by imaging line scan series at lower frequencies (<0.05 Hz). Care must be taken to limit the amount of excitation light and therefore scans on any individual spine. The maximum number will depend on laser power and scan time but as a general rule individual spines should not be scanned more than ~60 times in an experiment.

Discover the HyperScope, our most advanced multiphoton imaging system