Over-express yourself: Enhancing LTP in the hippocampus

Over-express yourself: Enhancing LTP in the hippocampus

By increasing the expression of Protein Kinase Mζ (PKMζ) neuroscientists from Boehringer Ingelheim Pharmaceuticals have shown that it plays an important part in the modulation of long-term potentiation (LTP) and long-term memory for contextual, but not cued, fear memory.

PKMζ is a persistently active brain-specific kinase expressed in the hippocampus and neocortex. Previous studies have found that it is involved in the formation and maintenance of long-term memory. Most of these experiments have used inhibitors or knock-out animal models to investigate its function. The selectivity of a number of these inhibitors has been questioned and the animal models may have compensatory mechanisms. Therefore, a more unambiguous approach is required to fully elucidate the role of PKMζ.

In this paper, published in The Journal of Neuroscience, the researchers employed an alternative technique. They used AAV-mediated bilateral overexpression of PKMζ in the hippocampus to test the effect on fear memory, spontaneous behaviour and electrophysiological recordings in rats.

Field Excitatory Postsynaptic Potential (fEPSP) recordings revealed that basal synaptic transmission and LTP were significantly increased in the hippocampus of slices obtained from mice overexpressing PKMζ. Furthermore, behavioural experiments in these mice showed an enhanced contextual, but not cued, fear memory and no significant change in spatial memory. These findings indicate that PKMζ acts as an important modulator of synaptic plasticity. The modulation of LTP could not be stopped with protein-synthesis blockers, suggesting that PKMζ acts on LTP in a protein-synthesis independent manner.

The increased basal transmission, as measured by fEPSPs, of the slices of mice overexpressing PKMζ was observed mainly as AMPAR currents. This suggests PKMζ may modulate AMPAR trafficking, increasing the number of receptors on the postsynaptic membrane ready to respond to the basal release of glutamate.

This paper shows the power of combining electrophysiological recordings and behavioural experiments in animal models of overexpression. The results indicate that PKMζ has a crucial modulatory function in synaptic plasticity and hippocampal memory processes.

Electrophysiological recordings of brain slices were made using a high-throughput Scientifica SliceMaster system. 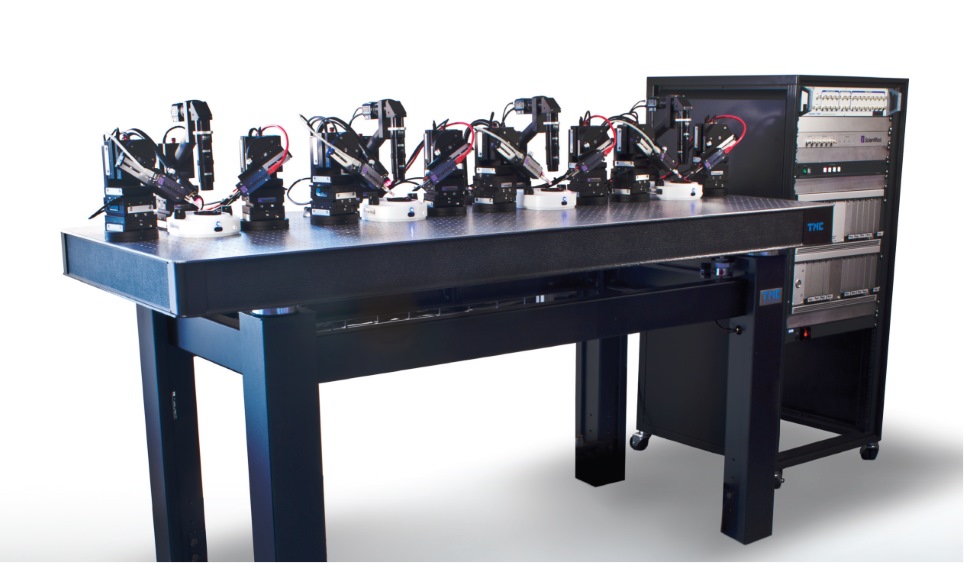 The SliceMaster is a semi-automated electrophysiology system for concurrent or independent recordings from up to eight brain slices. A single trained user can use the whole system increasing efficiency and throughput whilst improving statistical design and reducing animal use.