Dr Natalia De Marco Garcia works at The Brain and Mind Research Institute, part of the Weill Cornell Medical College as an Assistant Professor. The De Marco Lab is interested in how neurons find their destination in the brain and how they integrate into the surrounding network.  Dr De Marco Garcia recently gave a talk on her research as part of the ‘NEUReka!’ seminar series at King’s College London.

Her talk – held at the historic Anatomy Museum in the Hodgkin Building at Guy’s Campus – outlined the challenges faced by newly born interneurons migrating and assimilating into the cortex. Not only must they find their way to the correct position but also make connections with other neurons that arrived and connected with each other earlier (Figure 1). This challenge is particularly true for a subset of interneurons which derive from the caudal ganglionic eminence. 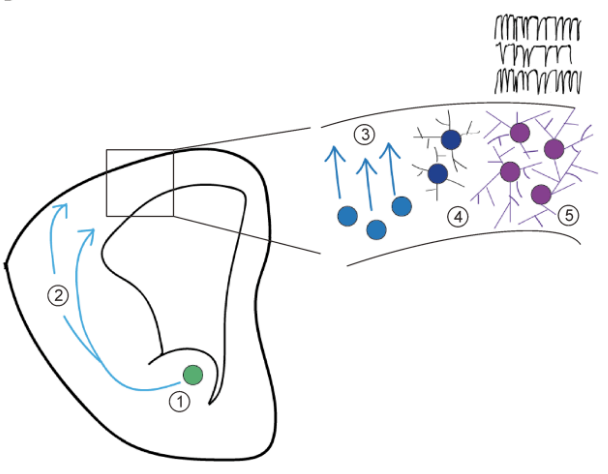 To study this phenomenon Dr De Marco Garcia and her team exploit several reporter mouse lines to highlight these interneurons. To visualise how these neurons move, settle and connect into the network the researchers create a cranial imaging window in the top of the skull to view neuronal activity. The researchers found that depending on which neurochemical markers the neurons express, a subset of these cells (reelin-positive) require excitatory input from the thalamus to find their target position.

They then asked whether it was sensory stimuli that activated the neurons in the thalamus, which then guided the interneurons to their destination. By plucking individual whiskers of experimental mice, they demonstrated that the interneurons get confused and settle in the wrong layers within the neocortex in the absence of sensory stimuli. They took this approach a step forward and imaged these cells through the imaging window. Using a live Ca2+ sensitive dye, GCaMP6s they established that the reelin-positive interneurons were ‘tuned’ to the whiskers. They observed groups of cells producing synchronous Ca2+ waves in response to whisker stimulation. This synchrony decreased from the 6th postnatal day to the 12th postnatal day and when they looked at the connectome of these cells, they found that the innervation from the area of the thalamus they identified earlier was mostly gone and it was replaced by new input from another thalamic area, which was reported to connect onto these cells in the adult brain.

Development-specific connections are challenging to study (since they are transient and replaced by new connections in the adult brain), but they are critical for the correct wiring of the neocortex. By mapping and investigating these pathways in more detail, the De Marco lab, with others, is trying to address one of the most pressing questions in neuroscience: how does the brain develop and what might be the cause behind the vast array of neurodevelopment disorders, such as autism and epilepsy?

Scientifica supports the NEUReka! Seminar Series to help them book speakers from top research institutions around the world.