At the bench: Bringing mysterious brain structures to light

At the bench: Bringing mysterious brain structures to light

A decade and a half after the 1990’s were dubbed the “Decade of the Brain” neuroscientists surprisingly still find themselves at a loss for assigning function to certain prominent structures in the mammalian brain. Why? Like any other field in science, neuroscience has been subject to waves of research topic popularity; the amount of knowledge gathered on the visual system and hippocampus, for instance, far outweighs that of other systems.

Part of the reason for this disparity is that certain brain regions are well-shaped to allow for injection of toxins to achieve functional lesions. Other so-called “dark matter” regions of the brain, such as the claustrum, endopiriform nucleus, and reticular nucleus of the thalamus, for example, have evaded functional elucidation by standard lesioning techniques or functional imaging approaches due to their elongated, slender shape and close proximity to other critical structures.

How can these obstacles be overcome so that we can assign function to these mysterious nuclei and, thus, enrich our understanding of the broader functional organization of brain as it relates to sensory integration, cognition, and behaviour?

Thanks to the contribution of both individual lab efforts and large-scale approaches as implemented by the Allen Institute for Brain Science, our knowledge of which genes are expressed in which brain areas has exploded.

Leveraging this information, several groups have generated and generously disseminated genetically modified mouse lines allowing for expression of fluorescent proteins or Cre recombinase selectively in understudied brain nuclei. Visual identification of neurons in these nuclei for electrophysiological analysis, expression of opsins or designer receptors, or selective deletion of genes from these neurons is now possible, among other manipulations. Such “genetic access” to previously inaccessible nuclei is transforming our ability to explain brain function and dysfunction. 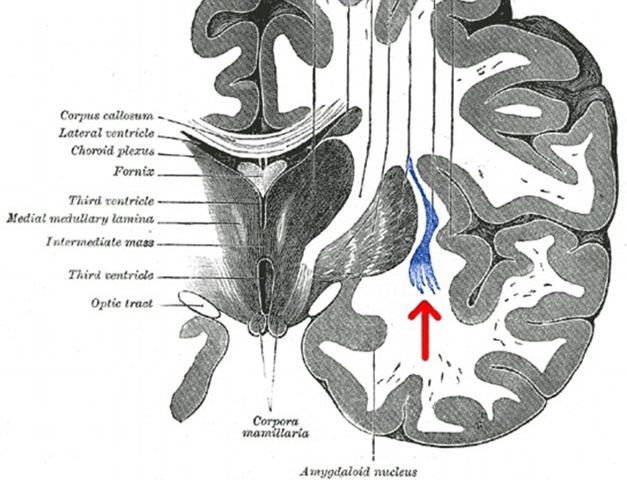 As previously mentioned, the claustrum (see red arrow in figure) is just one, but perhaps the foremost, example of a prominent brain nucleus that has long suffered from a lack of functional elucidation. Recognizing that this structure is centrally located in the brain with an extraordinarily high degree of connectivity with the cortex, Francis Crick, along with Christof Koch, proposed the claustrum to be the nucleus that binds sensory information to generate what we experience as a unified conscious experience of the world.

This bold concept spurred a revival of interest in this structure and a search for its “genetic access”. Fuelled by recent findings of genes expressed selectively in claustrum, several studies across the globe are now underway to test the function of this “dark matter” nucleus. With the now widespread use of genetically modified organisms coupled with optogenetics, chemogenetics, and imaging of genetically encoded calcium indicators, it is only a matter of time before the brain’s dark matter reaches the light.(www.claustrumsociety.org)

Brian N. Mathur, PhD is an Assistant Professor at the University of Maryland School of Medicine in Baltimore, Maryland, USA. His lab is focused on the neural circuitry of action learning and control in normal and pathological states. For more information, see www.mathurlab.org.