At the bench: Auditory coding at the inner hair cell synapse

At the bench: Auditory coding at the inner hair cell synapse

Inner hair cells (IHCs), the auditory sensory cells of the cochlea – the organ of hearing – transduce sound stimulation into a neural message. At their apical side, the IHCs harbour a staircase of actin-rich microvilli called stereocilia, where the mechanotransducer (MET) channels are located (Peng et al., 2011). The precise nature of the MET channel is still unknown, but the search for its molecular correlate is an intense field of investigation (Fettiplace and Kim, 2014). Incoming sound stimulation deflects the stereocilia bundle, opening the MET channels, which depolarise the hair cell. At the basolateral side, the hair cell depolarization opens the calcium channels leading to the influx of calcium required for synaptic vesicle fusion and glutamate release (Glowatzki et al., 2008). Activation of afferent auditory nerve fibres then conveys the acoustic information to the cochlear nuclei.

Action potential firing in the cochlea

Before the onset of hearing (P10-P12 in the mouse), the cochlea is not capable of transducing incoming sound stimulation, as the ear canal is closed and the cochlear structures are still in an immature state. The spiking activity of the developing hair cells, therefore, provides a useful means to elicit the activation of the afferent auditory nerve fibres (Tritsch et al., 2007; Wang et al., 2015). As each single action potential is associated with the release of glutamate onto the afferent auditory nerve fibres (Beutner and Moser, 2001; Marcotti et al., 2003). Such activity is thought to consolidate and refine the synapses along the ascending auditory pathways (Tritsch et al., 2010; Clause et al., 2014). The discharge rate is also under the control of cholinergic efferent fibres, which originate from the brainstem and project onto the immature IHCs. Acetylcholine release activates the α9α10 nicotinic receptor, which in turn opens the SK2 potassium channel to hyperpolarize the IHCs (Glowatzki and Fuchs, 2000; Katz et al., 2004; Goutman et al., 2005; Zorrilla de San Martín et al., 2010; Johnson et al., 2011; Roux et al., 2011; Sendin et al., 2014). Using perforated patch-clamp recordings, we track the pattern of the spiking activity in the developing IHCs over an extended period. Thus, we demonstrated that the IHCs fire action potential in a burst manner, which becomes highly stereotyped at the end of the first postnatal week (Sendin et al., 2014). In the future, we aim at investigating in more details the mechanism underlying IHC activity and regulation using pharmacological tools and mutant mice. 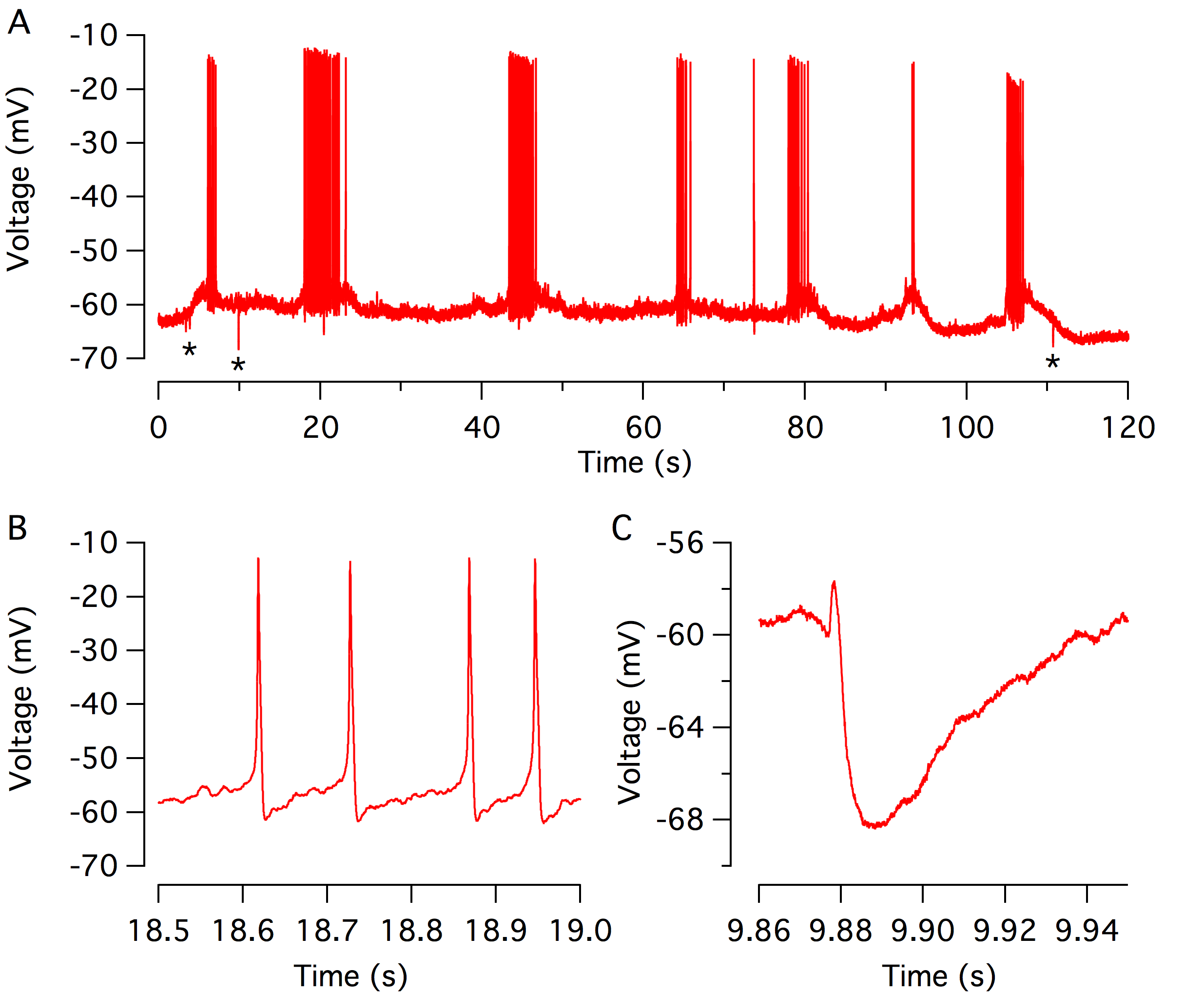 After the onset of hearing, the capabilities of hair cells to encode the acoustic information are astonishing. The hair cells can sustain a phase-locked response of up to 2 kHz over an extended period. This peculiar feature requires extreme specialisation in the molecular determinants of the stimulation-secretion. Therefore, the synapses of the IHCs contain a large organelle, called the synaptic ribbon, which concentrates the glutamate-filled synaptic vesicles (Nouvian et al., 2006). Although some essential proteins, such as Ribeye - the major component of the ribbon - (Schmitz et al., 2000; Maxeiner et al., 2016), Bassoon - that anchors the ribbon to the plasma membrane - (Khimich et al., 2005; Frank et al., 2010), Vglut3 – the intravesicular glutamate transporter (Ruel et al., 2008; Seal et al., 2008) - or Otoferlin - that promote the synaptic vesicle replenishment - (Roux et al., 2006; Pangršič et al., 2010) have been identified, the full picture of the synaptic machinery has not yet been determined. Indeed, the exocytosis in hair cells seems to be independent of neuronal SNARES proteins (Nouvian et al., 2011), Complexins (Strenzke et al., 2009) and Munc13 and CAPS priming factors (Vogl et al., 2015).

We identify the molecular make-up of the IHCs ribbon synapse using pharmacological or molecular biology methods combined with membrane capacitance measurements, as a proxy of synaptic vesicle exo-endocytosis. Using this approach, we recently showed that the disruption of the actin filaments by Latrunculin A or Cytochalasin D increases the calcium-triggered synaptic vesicles exocytosis (Guillet et al., 2016). In our experiments, drugs were infused into the hair cell through a patch pipette. Thus, patch-clamp recordings provide us with clear-cut information to highlight the role of the protein of interest in the hair cell transmitter release. Another way to determine the synaptic machinery consists of using transgenic models, in which the protein of interest has been knocked out.

Additionally, the contribution of the proteins in sound coding is tested at the system level using electrocochleography, which helps us to grasp the hair cells potential receptor in vivo, and using the auditory brainstem response, which reflects the synchronous activation of the ascending auditory pathway. Because the alteration in transmitter release leads to auditory deficits, knowing the role of the different hair cell synaptic proteins is an essential requisite for future hearing restoration (Moser and Starr, 2016).

Dr Régis Nouvian received his PhD in Neurosciences in 2004 under the supervision of Jean-Luc Puel (Montpellier, France). He then joined the lab of Tobias Moser as a post-doctoral fellow (Göttingen, Germany). In 2008, Dr Nouvian was hired by the CNRS as a researcher to work at the Institute for Neurosciences of Montpellier (Inserm U1051).

Palmer A.R., Russell I.J. (1986) Phase-locking in the cochlear nerve of the guinea-pig and its relation to the receptor potential of inner hair-cells Hearing Research 24:1–15