Neuronal electrophysiology (ephys) is the study of the electrical properties of biological cells and tissues in the nervous system. Changes in these properties allow the nervous system to perform its many functions, which are not only responsible for keeping us alive but also allow us to achieve higher levels of consciousness.

Ephys involves the measurements of these changes, usually voltage or current, on a variety of scales from single ion channels to the whole brain. Studying these properties has many implications beyond the basic understanding of how the brain works, including investigations of neurological disorders and the potential uses or effects of pharmaceutical compounds.

The electrical potentials across cell membranes (and their variations) is what makes some cells electrogenic. They are created by maintaining different concentrations of ions, such as sodium (Na+) and potassium (K+), between the inside of the cell (intracellular liquid) and the outside (extracellular liquid). The cell’s membrane prevents the movement of ions across it. The only way they can diffuse across is be passing through specialised ion channels that can be open or closed.

When a neuron is at rest, the majority of Na+ channels are closed, but a few K+ channels are open. K+ ions are free to diffuse out of the cell down the concentration gradient while an electrical force, produced by K+ ions attracted to the negative cell interior pulls K+ ions into the cell. These forces will achieve an equilibrium where there is no net movement of K+ ions across the membrane. This is the equilibrium potential for K+. The resting membrane potential is the sum of the equilibrium potentials of all the ions and their relative permeability. In neurons, this leads to a -60 to -70 mV charge across the membrane.

This animation provides a great visual representation of how neurons create a resting membrane potential.

The firing of a neuron is driven by the opening of increasing numbers of voltage-gated sodium channels and the entry of Na+ ions into the cell. After an action potential occurs, the cell membrane will rapidly repolarise to its resting membrane potential.

This animation gives more details on the process of how action potentials occur.

Action potentials propagate along an axon to deliver electrical signals to other parts of the cell. The inward flow of current at one point on the axon spreads along the axon and depolarises adjacent sections of the membrane. Membrane patches need time to recover after firing before another action potential can occur. This limits the frequency of action potential firing but also ensures that it can only travel in one direction along the axon.

To study these potentials, electrophysiologists make a variety of recordings.

Traditional intracellular recordings require the insertion of a microelectrode into the interior of the cell. Most electrodes come in the form of a glass micropipette with a <1 mm tip. These pipettes are filled with intracellular fluid solution (similar to the fluid in the cell). A silver chloride wire inside the pipette connects this solution to an amplifier that can record and process this signal.

The patch-clamp technique removes the need to impale the cell, and the pipette is placed on a ‘patch’ of membrane instead. Patch-clamp micropipettes often have a slightly larger diameter and are placed adjacent to a cell. Gentle suction draws a part of the membrane into the tip creating a situation known as cell-attached mode. Cell-attached mode can be used to measure the electrical properties of the ion channels in that specific patch of membrane (technically not a form of intracellular recording). 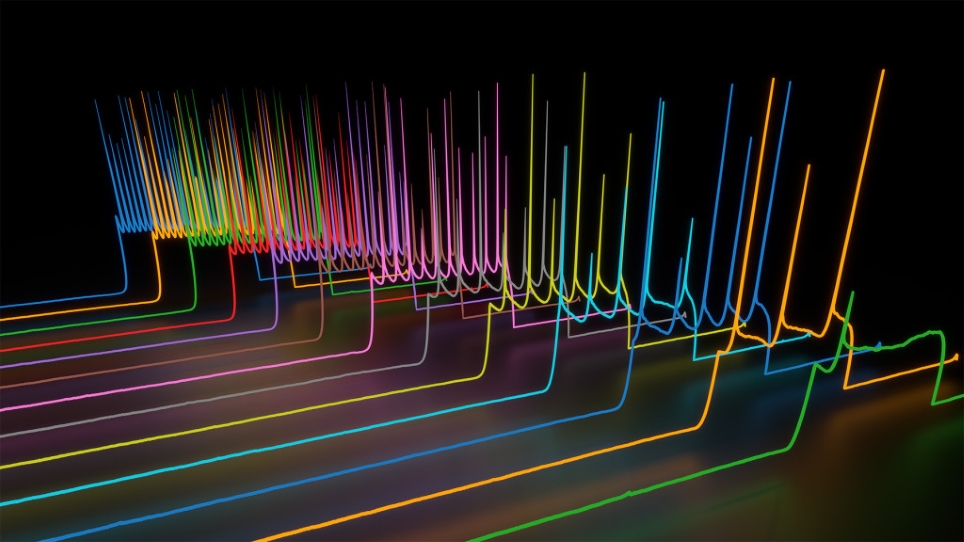 The application of more suction can cause the patch to break leaving the electrode in contact with the whole-cell, hence the name whole-cell mode. This enables stable intracellular recordings to be made. There are other modes of patch clamp including the inside-out, outside-out, perforated and loose patches. Each of these modes enables the study of slightly different properties of the ion channels within the membrane.

This video provides an excellent overview of the patch-clamp technique and its different variations.

The voltage clamp method allows electrophysiologists to measure the changes in ionic currents across cell membranes. It requires an amplifier that holds or ‘clamps’ the membrane voltage at a set level. It does this by iteratively measuring the membrane potential and altering the current to maintain the voltage at the desired value. The currents are recorded and reveal how changes in potential effect the cell, this is of particular interest because many of the ion channels in the membrane of a neuron open and close depending on the voltage.

This animation gives a visual description of how the voltage clamp method works.

The current clamp method allows a researcher to record the membrane potential while injecting positive or negative current into the cell. In current clamp mode, the voltage across the membrane can vary. Voltage changes in response to the administration of a drug or stimulus indicate differences to the ionic conductance of the membrane.

Intracellular recordings are great for measurements of the ionic conditions in a single cell. A different set of measurements can look at changes in ion concentrations in the extracellular fluid or a group of neurons.

Extracellular recordings show changes in the current or potential of several cells surrounding a microelectrode. Alterations to position and size of this electrode will change the nature of the measurement, depending on what properties are being investigated. By using two or more electrodes and a process called spike sorting, it is possible to work out the number of cells being recorded from and the activity occurring in each cell. Spike sorting uses computer algorithms to analyse the waveforms of the electrical activity from multiple electrodes and distinguish the activity of the individual neurons.

Microelectrode arrays are chips that contain multiple electrodes through which neural signals can be recorded. They commonly have stimulating electrodes to deliver signals to a sample as well. The number of electrodes ranges from tens to thousands depending on the spatial resolution and amount of data required by the experiment. Different types of array can be used for a wide variety of in vitro and in vivo applications. 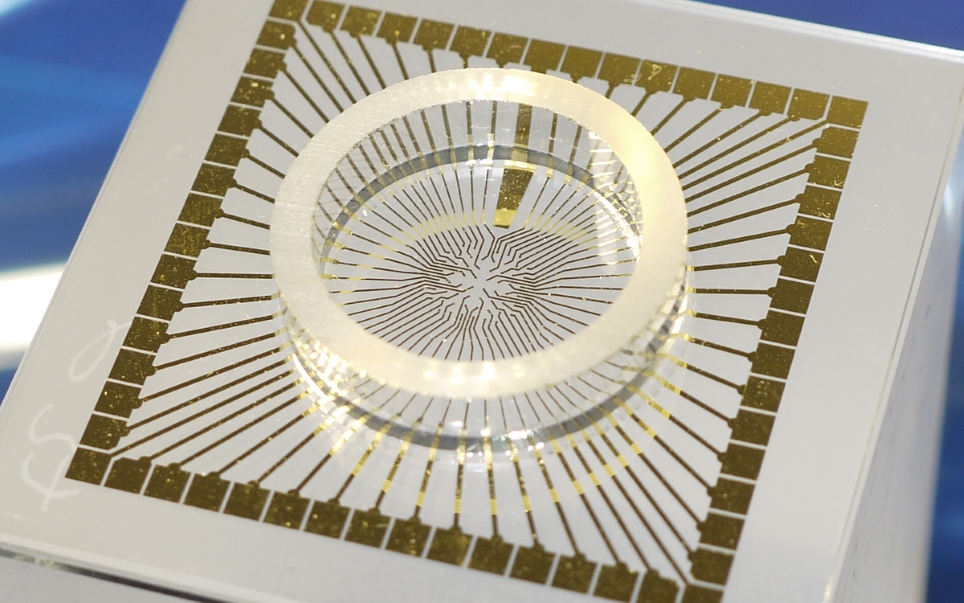 An example of an in vitro multielectrode array (Source: MultiChannel Systems)

The present and the future

Currently, electrophysiology is being enhanced through its combination with techniques such as multiphoton microscopy and optogenetics.

One of the advantages of multiphoton microscopy is its ability to create detailed images of the brain deep within brain tissue, making it possible to see the morphology of a neuron at depths unattainable with standard fluorescence microscopy. By combining this information with detailed electrical activity, researchers can establish new insights into the structure and function of the cells.

Optogenetics enables researchers to excite or inhibit specific neurons with unprecedented temporal and spatial resolutions using light. By recording the electrical activity surrounding a neuron that has been stimulated or inhibited it is possible to establish a direct link between a neurons excitability and the consequences in associated cells.

Further developments in optogenetics and microscopy will enable researchers to do more sophisticated experiments in different brain regions and help improve our knowledge of the nervous system.

One potential development in electrophysiology is the creation of more advanced voltage sensitive dyes. Current dyes can be used to measure electrical activity within cells without the need for a microelectrode. The advantages of voltage-sensitive dyes include the ability to measure from large populations of cells simultaneously. This enables visualisation and quantification of action potential initiation and propagation through a neural network. However, improvements in the way they function will allow further insights to be made. These improvements include improved quantification, less pharmacological effects and compatibility with two-photon imaging.

Neurons have been studied for millennia, but there is still so much to be discovered about the nervous system and the human brain. Electrophysiology is a great way to investigate neuronal activity on a variety of scales, and with more advanced techniques and technologies becoming available there are even more opportunities to make discoveries.