Discovery of the role of the habenula as an information hub, the first fully functioning 3D model of glioblastoma and a new type of BCI that could enable recording of brain signals in unprecedented detail, are some of Scientifica's top 10 neuroscience stories from August.

A new hydrogel that could transform the way Parkinson’s disease and other neurological conditions are treated has been developed by researchers from the Australian National University (ANU) and the Florey Institute of Neuroscience and Mental Health.

Made from natural amino acids, the hydrogel acts as a gateway to facilitate the transport of stem cells into the brain. Putting the stem cells into a gel means they are exposed to less stress when injected into the brain, helping them to be integrated more successfully. The gel also releases GDNF, a growth-enabling protein that helps restore damaged tissue.

When the hydrogel is shaken or energy is applied to it, it becomes a liquid, allowing it to be injected into the brain through a small capillary. Once in the brain, the gel becomes solid again and provides support for the stem cells, which replace lost dopaminergic neurons.

In an animal model of Parkinson’s disease, the hydrogel was shown to increase survival of grafted dopamine neurons and restore movement. The delivery of stem cells using the hydrogel also avoids many unwanted side effects associated with some of the drugs currently used to increase levels of dopamine in Parkinson’s patients. It also provides a one-off intervention that can lead to sustained dopamine levels for decades.

It is hoped that this cost-effective and easy to manufacture treatment will be made available in hospitals in the near-future, following clinical trials.

A new type of brain-computer interface (BCI) system that coordinates a network of independent, wireless neural sensors to record and stimulate brain activity, has been developed by scientists at Brown University.

Current BCIs utilise one or two sensors that record signals from up to a few hundred neurons, then use these signals to drive external computers or robotic prosthetics. In this research, almost 50 sensors, termed ‘neurograins’ were used to record neural activity in rodents. The signals are wirelessly sent to a central hub, where they are processed and coordinated.

This type of system could one day enable brain signals to be recorded in unprecedented detail, leading to new insights into how the brain works and potential therapeutic developments for brain or spinal injuries.

Increasing the intricacy of brain recordings

An inflatable robotic hand developed by scientists at MIT has proven successful in enabling amputees to have real-time tactile control and carry out a range of daily tasks, including zipping a suitcase, shaking hands and pouring a drink.

Current neuroprosthetics can be extremely expensive, as well as heavy and rigid. This inflatable prosthesis is soft and elastic, extremely light weight and much lower cost compared to traditional prosthetics.

Designed with a system for tactile feedback, the inflatable prosthetic restored some sensation in the volunteer’s residual limb. The limb is currently able to perform four grasp types, with the potential for more. Further developments hope to improve the sensing and range of motion of the prosthetic, so it can eventually be widely used by amputees.

4. Smells and emotions tug on the brain’s “rein”

A tiny region in the middle of the brain, called the habenula, plays a more important role in helping the brain respond to environmental changes than previously thought, research by the Norwegian University of Science and Technology’s Kavli Institute for Systems Neuroscience has found.

In this zebrafish research, which used Scientifica’s Multiphoton Resonant System and PatchStar micromanipulator, the scientists found that the habenula acts as an information hub, relaying information such as smell and sight from the environment, as well as internal states associated with emotions and learning, to the regions of the brain that control adaptive behaviours. This integration of information enables the brain to change states to suit the situation, allowing animals to adapt to situations.

Previous studies in humans have linked dysfunctions in the habenula to neurological conditions such as mood disorders and addiction. This evidence that the habenula has a critical role in regulating moods and brain states, could enable new ways of modifying habenular activity non-invasively, using sensory experience, to be developed.

Habenular: A central hub in the brain

An international team of researchers from UCL, Kavli Institute for Systems Neuroscience and the Max Planck Institute for Human Cognitive and Brain Sciences has designed an artificial neural network (AI) that can translate raw brain activity data into behaviours and stimuli.

The data that neuroscientists are able to record from the brain is getting larger and larger, but understanding the data is a big challenge. This automatic method of translating raw data could solve this problem and advance our understanding of how brain activities relate to behaviours.

The network, called DeepInsight, was tested on neural signals generated from rats exploring an open area, and was found to precisely predict their position, head direction and running speed. The network can decode data more accurately and also identify new aspects of the neural code that were previously not understood. It can also predict behaviours from recordings; testing the network on a pre-existing dataset of human brain activity demonstrated it could infer hand movement in humans.

This exciting AI network could give researchers rapid automated analysis of their unprocessed neural data, saving them time, which can then be spent on using more conventional methods on the most promising data.

Decoding data from the brain

Researchers at Tel Aviv University have 3D-printed a glioblastoma tumour, which mimics the malignancy of a living cancer, creating the world’s first fully functioning 3D model of this type of tumour.

This notoriously fatal and highly aggressive brain cancer spreads quickly and unpredictably, making it a challenge to treat. This 3D model, which includes both cancer tissue and the surrounding environment that affects the tumour’s development, will enable potential treatments to be better tested, improving and accelerating the development of drugs for this type of cancer.

By printing tumours based on patient samples, different drugs and combinations of drugs can be tested to see which is most effective for that specific tumour, opening the door to personalised medicine, which has the potential to dramatically improve patient outcomes.

Super-resolution imaging has been used by scientists at Scripps Research to reveal cholesterol’s role in regulating the production of the amyloid beta protein, which is known to be involved in Alzheimer’s disease.

These findings help explain why risk of developing Alzheimer’s has been linked to the cholesterol transporter apolipoprotein E (apoE) in genetic studies. The team discovered that cholesterol produced in the brain by astrocytes is carried by apoE to the outer membrane of neurons, where it appears to form clusters of cholesterol and related molecules known as lipid rafts. These lipid rafts are not well understood, but it is thought they act as hubs where signalling molecules congregate. The APP protein, which forms Aβ, is also located in neuron membranes. This research showed that cholesterol transported by apoE brings APP into contact with lipid rafts, where enzymes that cleave APP to form Aβ are located.

The team discovered that blocking the transport of cholesterol takes APP out of contact with the lipid rafts, preventing Aβ production. In mice that are genetically engineered to overproduce Aβ, forming Aβ plaques similar to those seen in Alzheimer’s disease, blocking astrocyte cholesterol production led to near-normal levels of Aβ production, with the plaques becoming almost non-existent.

Having a greater understanding of this process could make it a potential target for Alzheimer’s therapies. However, cholesterol is essential for many other processes, therefore any treatments would need to be highly targeted to maintain normal brain function. 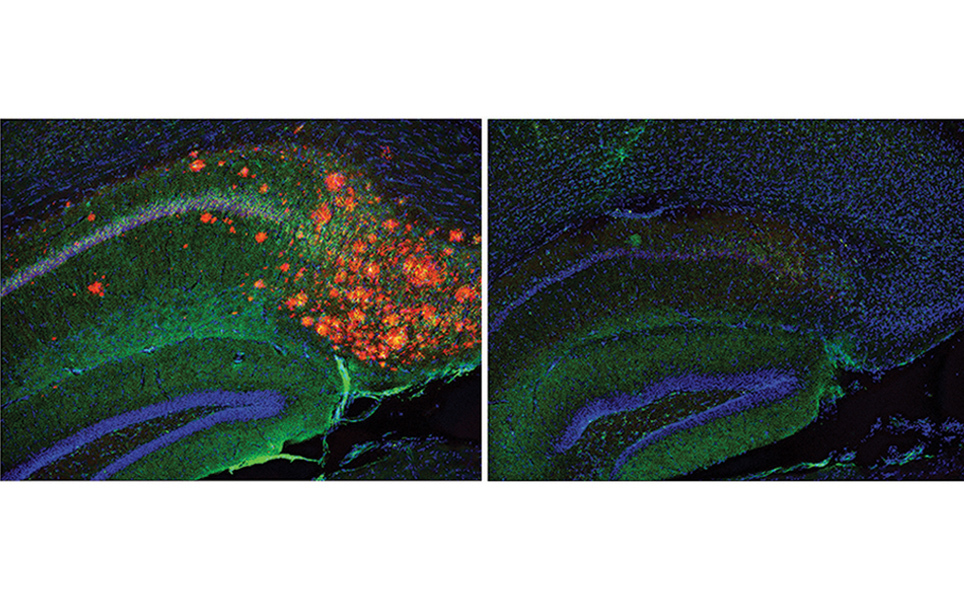 8. Sudden death from deep in the brain?

Using Scientifica’s SliceScope Pro 6000 electrophysiology rig to perform whole-cell patch clamp recordings from mouse brain slices, scientists at Vanderbilt University have gained insight into what may cause risk of sudden unexpected death in epilepsy (SUDEP) in patients with Dravet Syndrome.

Dravet syndrome, a rare form of epilepsy, is usually caused by mutations in the SCN1A gene. In mouse models of the syndrome, the researchers identified altered excitability in neurons located in the bed nucleus of the stria terminalis (BNST), and under-excitability of neurons projected from the BNST to the parabrachial nucleus, which is located at the top of the brainstem and involved in respiration.

Identifying that this circuit, located deep in the brain, could potentially be involved in respiratory dysfunction and sudden death in dravet syndrome could inspire future studies of the role of deep brain structures in epilepsy.

Investigating cells deep in the brain

Brain organoids with waves of activity similar to those seen in living human brains, have been developed by scientists at UCLA. Growing these organoids from patients with Rett syndrome meant the researchers were successfully able to observe patterns of electrical activity that resemble seizures, which are characteristic of the condition.

This research demonstrates that organoids that resemble human brain tissue, and accurately replicate aspects of both normal and diseased brain function, can be grown, enhancing the study of the causes and treatments of various diseases.

The organoids are generated from induced pluripotent stem cells, taken from a person’s skin or blood, which are then encouraged to form specific cell types, and even to aggregate to form three-dimensional organoids. This enables cells to be studied at an individual level, so scientists can understand how one person’s cells differ to normal, and drugs can be tested to see if they would be effective for a specific patient.

Although organoids cannot always be used to study brain disorders, due to not being able to replicate every aspect of the complex human brain, being able to mimic patterns of brain activity means different brain states can be modelled and the brain activity that occurs in various disorders can be studied.

10. 3D ‘heat map’ animation shows how seizures spread in the brains of patients with epilepsy

Using 150 electrodes implanted into an epileptic patient’s brain, researchers at UCSF have translated hundreds of EEG recordings into a 3D movie showing where seizures start and how they spread through the brain.

This personalised visualisation of seizure activity makes it easy to define where a seizure starts, whether there is one or more trigger sites, and how it spreads. These heat maps have been used to identify the initial seizure site and spread through the brain in more than 115 patients.

Take a look at our previous neuroscience stories